This is where I stopped tracking. The coyotes had crossed Pine Run and scampered up the bank.

Had a couple of visitors last night. The dogs alerted me to it when we went out for our morning pee.

It was too dark to make out the tracks then. Whatever it was came up the lane as far as the barn, rooted around a bit, then retreated from whence it came.

After breakfast, I headed out to follow the tracks. Two coyotes. They might have been interested in a fox or a rabbit that had crossed the yard earlier. It looked as though they decided the tracks weren’t fresh enough and their would-be prey was long gone.

The coyote tracks led down an old tractor lane, past a log cabin and through a stand of pines that had once been a farm field.

As I followed the tracks through the woods, the wind kicked up. It blew snow off the boughs, creating an instant blizzard.

After crossing through the woods, the coyotes had descended into a floodplain and crossed a small wash. They continued along an old wagon road, then followed Pine Run a short distance before crossing.

I decided not to follow any further. I had followed the tracks about 2/3 of a mile.

It’s possible these was the same coyotes whose tracks we followed across the ice on Pine Run a few months ago. 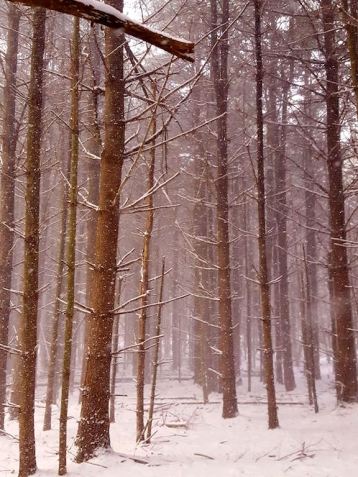 Instant blizzard. Wind gusts blowing snow of pine boughs in what had been a farm field. 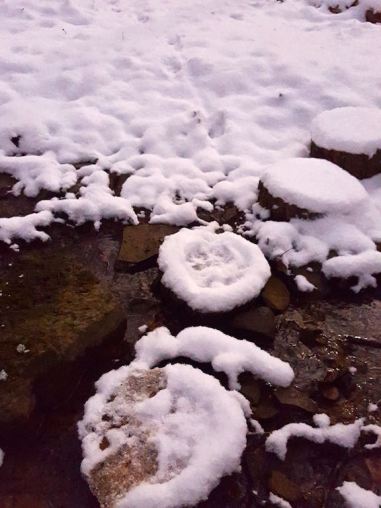 One of the coyotes found my stepping stumps to its liking when crossing a small stream. 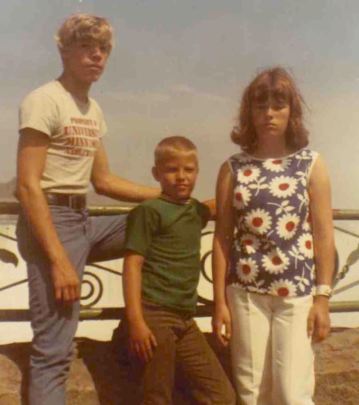 At Niagara Falls with my younger siblings. Little sis looked delighted to be there.

I didn’t drive until I was 19. Didn’t need to. If I needed to go somewhere, I walked, took a bus or hitchhiked. Seldom bothered my parents for a ride. I preferred the independence and adventure of getting around on my own.

Mom wasn’t keen on me hitchhiking. One day, Dad pulled me aside and gave me a bit of sage advice: “Don’t tell her.”

That served me well in life.

For the Independence Day holiday in 1969, dad took us to Niagara Falls — mom, two of my siblings and me. I was 17 at the time. While in Canada, we camped with a distant relative of my father and his family. They had a son my age. I didn’t have much in common with him; he wasn’t particularly bright.

Dad took us to see the falls. While we were walking around, marveling at the sights, I lagged behind. When it came time to head back to the campground, my father left me there, telling my mother I’d probably beat them back.

I nearly did. Caught a ride with a schoolteacher. I recall that we argued politics. Politely. She was Canadian, after all.

While sitting around the campfire that night, dad’s relative said, “I’d never leave my son behind like that.”

Dad looked across the campfire at the boy and responded, “Neither would I.”

Emerging from the fog, I inexplicably found myself drifting up to the lunch counter.

It had been a long, difficult paddle. Hours earlier, before the fog began to lift, I ran aground on the salad bar. I knew I was in trouble when I heard the crunch of croutons beneath my hull. Couldn’t rock the canoe free, so I stepped out and my boot got stuck in the thousand islands. Thank God, it wasn’t bleu cheese!

Prior to that, I got the canoe hung up on a table, but was able to rock free. Restaurant tables are designed for that purpose. That’s why one leg is always shorter than the rest.

I should have known better than to paddle in there. The place was a real dive. But, looking back fondly, that’s where I found Pearl. Never known the likes of her before. She was cultured — really well-rounded. I’ll never forget Pearl; she was the camphor cake in the urinal of my life.

But alas, she slipped through my fingers. Disappeared into the depths of a booth cushion, condemned to sleep forever among the cellophane cracker wrappers, lost coins and frilled toothpicks. 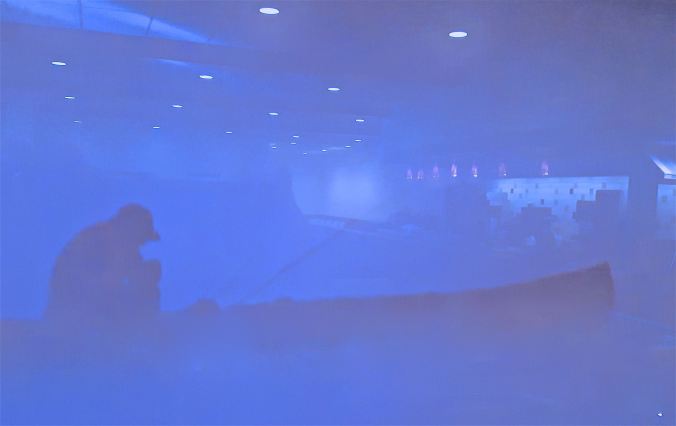 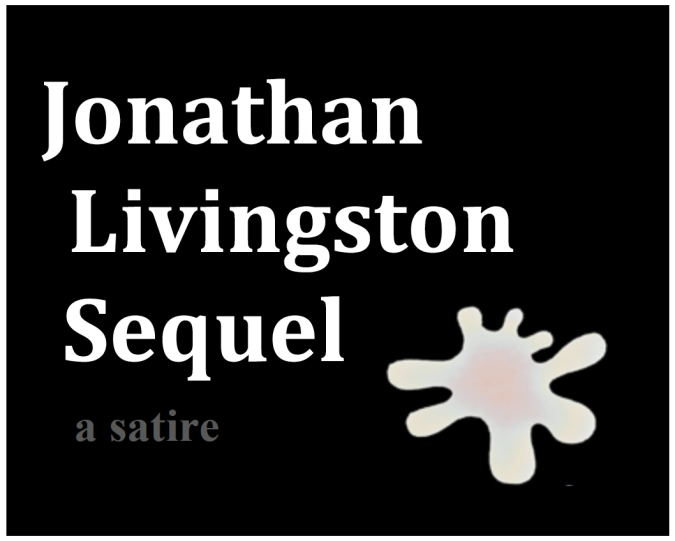 Written in 1970, Richard Bach’s iconic novella captured the essence of post ’60s optimism. Jonathan Livingston Seagull gave us hope that our newfound idealism could lead to an age of self-realization and enlightenment. But, in the decade that followed, all that crashed and burned.

That’s where my book would come in. In Jonathan Livingston Sequel, my protagonist would be a ring-billed gull, scavenging parking lot wastelands and subsisting on stale French fries.

In researching my novella, I’ve come across a few interesting tidbits on the ubiquitous parking lot gull.

According to the Cornell Lab of Ornithology, most the gulls you see strutting around fast food and shopping mall parking lots or soaring overhead and pooping on your car are ring-billed gulls. Not surprisingly, many of them have never seen the open bodies of water from whence their ancestors came. Nor ever will.

Like humans, they have adapted to a decadent world and thrive — more or less — in an artificial habitat.

Being opportunistic omnivores, it’s what they do. Them and us.

Not that these gulls subsist solely on stale French fries and other food scraps. Their diet might also include fish, insects, earthworms, small rodents, grains and pretty much anything they can swallow. They are not above swiping food from other birds. Cornell and other sources, including the New York Times and Matt Soniak, writing for Mental Floss, report that ring-billed gulls also are attracted to parking lots because the grassy areas harbor insects and worms.

Parking lots also mimic their natural habitat in that these wide open spaces allow them to watch for would-be predators and scatter if need be. Strong and acrobatic flyers, ring-billed gulls can snatch morsels of food in midair and reach speeds in excess of 40 miles an hour.

Low vegetation around parking lots and landfills, another habitat to which the gulls have adapted, provide breeding habitat for these ground nesters. They also have been known to nest on flat rooftops. An interesting aside from Cornell: Ring-billed gulls have been known to add pebbles the size and shape of their eggs to their nests. Cornell also reports that their colonies include a small percentage of two-female couples. These pairs mate with opportunistic males and combine their eggs in the nest, producing “super clutches” of five to seven eggs.

Mankind facilitated some of these adaptations. By the same token, humans nearly annihilated ring-billed gulls. Like other species, they were hunted nearly to extinction in the late 1800s for their plumage, which was used to adorn hats. Colonies recovering from that onslaught were decimated in the mid 1900s by exposure to DDT and other pollutants.

Thanks to environmental regulations, many of which were enacted in the heady days when Jonathan Livingston Seagull was written, populations have recovered. One estimate put the breeding population at 1.7 million. Ring-billed gulls are protected in the U.S. and Canada under migratory bird laws.

Like humans, parking lot gulls have become a bit of a nuisance. Shooting them or throwing stones at them is frowned upon, so we’re pretty much limited to taunting them. Apparently, that applies to humans as well.

Speaking of verbal abuse, if you want to avoid the wrath of ornithologists, never use the word “seagulls” in their presence. They will enthusiastically remind you that these birds are called gulls, not seagulls. If you persist in using the wrong term, ornithologists will flail their arms menacingly and squawk at you.

In my research, I came across a private contractor with a few suggestions on how to rid parking lots of gulls. A California outfit called Cleaning & Maintenance Services recommends having parking lots professionally cleaned on a regular basis. It just so happens that this is a service they offer.

The company also recommends not littering — fat chance of that happening — and covering trash receptacles. Other remedies include rooftop bird spikes, ultrasonic repellants and something called gullwire, which discourages landing or nesting on the ground.

On the other hand, there is in Scotland a gull advocacy organization. Seagulls Are Not Evil strives to raise awareness of prejudice against gulls. The organization encourages people to engage in educational activities and lobby elected officials to live and let live when it comes to gulls. If you’re interested you can receive a Seagulls Are Not Evil sticker through their website https://www.seagullsarenotevil.info/.

In researching my novella, I also found there were at least two bands named after parking lot gulls. One of the bands, Parking Lot Gulls, is based in Worcester, Mass. The other band I found, Parking Lot Seagulls, is based right here in Ohio.

The Medina-based band’s name might not be politically correct, but I admire their attitude. In fact, pessimist that I am, a message posted on their Facebook page gives me hope for the future:

“The Parking Lot Seagulls are loyal vigilantes of Bird Law. Bird Law surrounds us, speaks to us, guides us. It is the song of the universe, the blood of the cosmos. Bird Law is eternal. Long live the birds.”

Maybe I can get them to do the music for the movie based on my novella.

(This was written for the Greater Mohican Audubon Society spring 2018 newsletter.)