Returned to Cleveland yesterday for a reunion with friends, which included a quick visit to the West Side Market.

For me, it was kind of like coming full circle. When I met these folks 36 years ago, I was an under-educated working class kid. I was driving trucks for a living, with little hope or regard for the future. Such was the fate for most the people I grew up with on the West Side. You graduated from high school, got a job and slogged through life, resigned to living and dying in that world.

When I met them, all that changed. (I was backing a truck up to a dock in Lorain, Ohio, when I first met two members of the group. They later introduced me to their circle of friends, who were connected by virtue of living in Shaker Heights, an East Side suburb.) Though much younger than I, they were well-educated and worldly. The things they talked about and their passion for living inspired me to go to college.

Eventually — very eventually — I was able to parlay raw writing talent, temper it with education and discipline and write for a living. Meager as it was.

I confess that the discipline was a battle. I pissed away years, way too many years, drinking, partying and generally fucking off. But eventually it happened.

The evolution came full circle during the 17 years I spent writing for the Ashland Times-Gazette, a small-town daily in North Central Ohio. There I learned that the world didn’t revolve around me. I learned that my job as a journalist wasn’t about Irv Oslin, it was about honestly and fairly chronicling the lives of the people of Ashland County — regardless of how I felt about their politics or way of life.

I came to know them and appreciate them for who they were.

That brought me around to Buddhist philosophy — losing the self. It brought me back, really, because I’ve always had a strong undercurrent of compassion, a desire to do for others.

I was reminded of this when I drove to the West Side Market yesterday to be reunited with the people who, so long ago, took the boy out of the West Side

I saw a middle-aged black woman getting into a car parked on Lorain Avenue and pulled up behind, waiting for her to vacate the spot. She got out, rooted around in the trunk, then closed it and walked around the car and opened the rear passenger-side door. It occurred to me that, had I been impatient and self-centered, I would have been annoyed at the delay.

The woman retrieved an umbrella from the back seat. It was sprinkling and chilly, so I figured she wanted to have it handy for when she reached her destination. Not so. She walked up to an old white man in wheel chair. He was waiting for a bus. She gave him the umbrella, got back into her car and drove off. 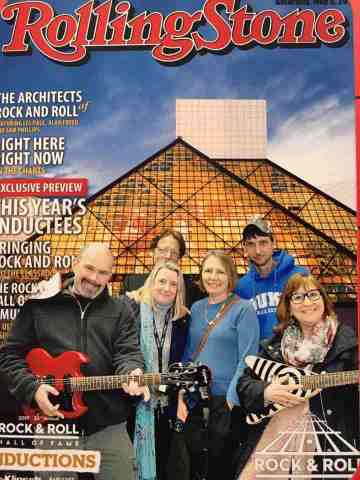 Reunited – Later in the day at the Rock & Roll Hall of Fame. Can’t thank these people enough.